Joseph Palumbo attended “Evening Elementary School” at P.S. 13 in Brooklyn, NY to learn to read, write and speak English.  It was after a long day’s work that he would gather the strength to go to class.  For at least 2 of those years, 1923 to 1925, Joseph wrote in the same composition notebook. 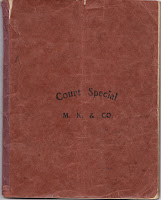 He learned about the founding fathers; Washington, Jefferson, Adams.  He learned about Lincoln and the civil war.  Joseph wrote about everyday events and customs that to many immigrants may have been confusing.  How to call a doctor from a corner store and use a telephone, remember to bring a nickel and the phone number.  How to buy a ready-made suit in a store or ride in an elevator with an operator.  City government and how it works.  The steps needed to stay healthy.  Written in pencil on ruled paper, you could see in the penmanship Joseph’s commitment to learning.  And carefully noted on top of his assignments was an occasional “snow day” when school was not held.

The first entry is on January 14, 1923 and it is a story about “Tony”.  “Tony is a lively boy who liked to run and jump.  One-day Tony ran in front of an automobile. Tony was knocked down and got a cut on his forehead and a scraped knee.”  It goes on to describe Tony’s day in detail, the driver who hit him, the kind doctor, the hospital and Tony’s prognosis. (He had to stay in bed for a few days to be on the mend.)  There are nearly 50 stories like that in Joseph’s composition book.

Joseph was born in Procida, Italy, October 4, 1897.  Leaving Naples, Italy on the SS Providence, 25th January 1921 as Giuseppe Palumbo he arrived in New York on the 9th of February 1921.  He lived and worked in Brooklyn, as a machinist and carpenter.  He petitioned for citizenship 15 July 1927.   And took the oath not long after.

His bride to be was Mary Grippo, escorted to New York by her brothers, as this was an arranged marriage. In 1928, in New Jersey, Joseph-the new American citizen and Mary were married.  They went on to have a happy life, had several children and grandchildren, and traveled back to Italy several times to see relatives.

The composition notebook, photos and documents were found in a worn, black, travel case, stashed in the back of a closet.  Somebody thought to save the items, perhaps they forgot they were there. In any case, I was privileged to “meet” Giuseppe Palumbo.
Visiting the Lower East Side Tenement Museum in New York, taking a tour of a tenement and walking the neighborhood to learn about the immigrant life, was eye-opening.  Learning about Joseph through these documents brought the immigrant experience to another level.
Joseph Palumbo is not part of my family.  He is the grandfather of a friend.  His story and my family's story are similar though.  Both came from far off countries, both wanted a better life, both were willing to work hard, both were willing to learn and participate in the building of our nation and both were proud to become Americans.

Posted by PathFinderFamily at 7:13 PM

PathFinderFamily
It started with a curiosity of where my grandparents were from. Sometimes it was Poland, other times Russia and most often there were never any details. With an opportunity to live in the Washington D.C. area, and access to the National Archives, I spent many a day searching through microfilm to look for my grandmother's information. Not realizing until 20+ years later she had a different surname. Once that piece of information surfaced all kinds of information flowed. And so the journey continues.