Tombstone Tuesday is about Max Joseph. Batkin, Brooklyn, New York.  Born the 23rd of June 1873 in Vilna, Lithuania, he came to the US in 1899, married to Shifra Chaite.  The initial information about Max came from "The Red Book" as it is referred to in the family.  The Batkin Family Genealogy, compiled and edited by Stanley, L. Batkin, is a comprehensive publication about the Batkin clan.  Stanley Batkin sent this book to each cousin, it is a work of love and a fantastic resource.

Max J. Batkin's parents are Philip (Baruch) Batkin and Sarah Rivlin, born and died in Vilna, Lithuania.  Max has a brother, Henry Batkin, born in Vilna, and they had a sister Julie who remained in Vilna.  Not much else is known about Julie.

Max had 3 children; Jacob (Jack) Batkin, born in 1900 in the USA, Brooklyn, NY, on Essex Street. A copy of his birth certificate was found in New York.  Jack married Lillian Bloom, they had a daughter, Selma, who married Sidney Goer, who had two children, Suzan Goer and Jay Goer.

The oldest son, Harry Batkin was born in Brooklyn, in 1899.  He married Faye Smith, born in Vilna. Harry and Faye had two children, Helen and Paul.  Tragedy struck on July 4th, 1928 in Coney Island when a car accident severely hurt Harry. Suffering burns over his body he died the next day.  Faye and the children eventually moved to Boston to be with her parents, Issac and Sarah Smith.

There is no information on Ceil, the daughter who remained in England. no birth date, marriage information, town - nothing.

Max's brother Henry came to the US in 1891.  Married to Annie Rosenthal, they had 5 children - Jennie, a daughter, Rita, Fannie and Jacob.  Unfortunately this side of the family did not escape tragedy, as Jacob was killed in a robbery while collecting rent from the tenants of a building that Henry owned.

Max J. Batkin is buried in the Baron Hirsch Cemetery on Staten Island, NY. two graves down from his son Harry.  He is in the Velizer Progressive Benevolent Association section.  In the 25th anniversary  program publication of the Velizer Association, M. Batkin is listed as a trustee, and there is a page of memorials, that includes Max's son Harry. 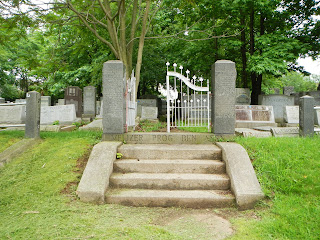 Posted by PathFinderFamily at 4:13 PM

PathFinderFamily
It started with a curiosity of where my grandparents were from. Sometimes it was Poland, other times Russia and most often there were never any details. With an opportunity to live in the Washington D.C. area, and access to the National Archives, I spent many a day searching through microfilm to look for my grandmother's information. Not realizing until 20+ years later she had a different surname. Once that piece of information surfaced all kinds of information flowed. And so the journey continues.